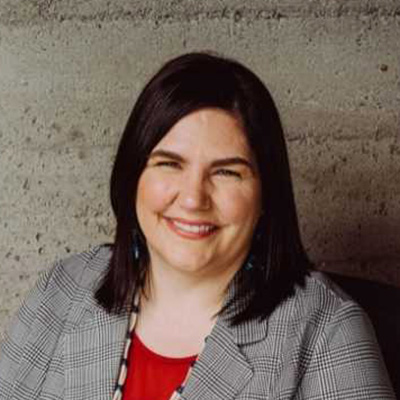 Carmen Lansdowne is the first female Indigenous person to be elected Moderator of the United Church of Canada. She is a member of the Heiltsuk First Nation, and a life-long member of The United Church of Canada (UCC). Baptized into the UCC in 1975, she waited until adulthood to make a profession of faith which came from a deep sense of personal spirituality and a calling to participate fully in the life and work of the church.

She attended the Vancouver School of Theology (VST) in the MDiv program from 2003-2007, and after successful completion of her internship Marengo Pastoral Charge (Alsask & Loverna, SK), she was ordained to further study in 2007. She completed coursework for a ThM degree at VST in 2008, then moved to Berkeley, CA where she commenced coursework for a PhD at the Graduate Theological Union. She completed the ThM in 2011 and the PhD in 2016.

In addition to her theological contributions as a writer and speaker, Carmen has served the church in a variety of roles. From 2006-2013 she served on the Executive and Central Committees of the World Council of Churches, as well as was an ex-officio corresponding member of the Executive, General Council. She continues to attend global theological and church gatherings by invitation. She has served on the Pension Board of The United Church of Canada, the Theology, Interchurch-Interfaith Committee, executive search committees for the General Council Office and the World Council of Churches, and various subcommittees of both the WCC and UCC. She served as one of six facilitators offering feedback from commissioners at General Council 43. She currently chairs the Indigenous Candidacy Board of the United Church and sits on the Keepers of the Vision of the Sandy Saulteaux Spiritual Centre. She also recently joined the Board of Directors of the Vancouver Foundation – Canada’s largest community foundation.

Carmen joined First United Church Community Ministry Society as Executive Director in February 2017. Under her leadership, she has effected an organizational turnaround resulting in increased capacity and stability. She has also shepherded to construction-phase a $65M redevelopment of First United’s property in Vancouver’s Downtown Eastside. The new purpose-built facility will triple First United’s programming and ministry space and add 103 nonmarket rental units of Indigenous housing (to be operated by Lu’ma Native Housing Society). Under Carmen’s leadership, First United has developed strong labour relations with its unionized staff, built a highly skilled and committed leadership team, increased revenues, and become a certified living wage employer. She worships at Lynn Valley United Church as she is able.

She continues to maintain academic interests through guest lectures and various writing projects and as a Christ Institute Fellow with the Westar Institute. Carmen guest preaches at different communities of faith several times a year, and remains committed to Indigenous way 1 L’Église Unie du Canada The United Church of Canada Rev. Dr. Carmen Lansdowne of being, parenting and partnering. She lives in North Vancouver with her partner, two children, and their dog Cocoa.